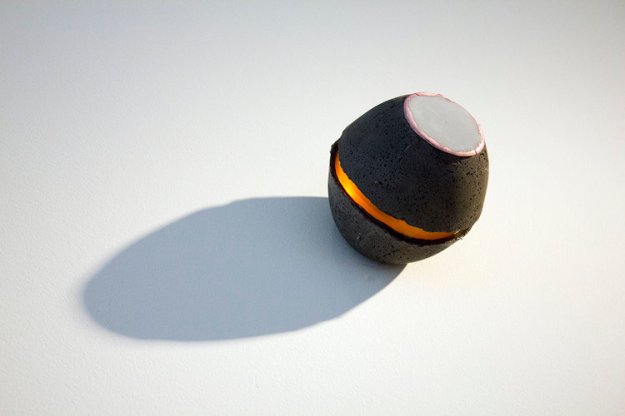 On View Now Until May 3…

We have a new exhibit in the Rose Gallery.  Richard Keely, San Diego sculptor and Professor of Art at San Diego State University, has his sculptures installed throughout the gallery walls.

Though Keely’s sculptures may appear unfamiliar as you step into the room, on closer look, they speak of materials and histories that are actually quite common.  Utilizing castings of wood glue, cement, resins, and more; Keely’s forms hold an unexpected depth, as if to be a portal to another place.  The conversations between the insides and outsides of his sculpture are striking, as are the interactions of surface and material.

Richard Keely’s statement for the show:

For me the most interesting objects wont hold still, they flicker, refusing to be pinned down to any kind of specifics. This flicker is what makes me want to experience them again and again. For the past several years I have been making sculptures that are inspired by and made from inexpensive, ordinary objects from daily life; drinking cups, food storage containers, waste bins etc. My interest in these objects is that they come from a history of collective refinement and are often beautiful, near perfect things. They are also things that are typically ignored, treated as commonplace; not interesting from an aesthetic or cultural perspective. When making the work I sometimes use the objects outright, but most often I use them as molds to fill with other common materials such as concrete, charcoal, wood glue or dirt. The works are process-based and when successful resonate with a familiarity, yet cannot be pinned down to specifics; creating a tension between their latent function and their current state.

Richard Keely is an artist and educator from Southern California. Originally trained as a painter Richard’s work during the last twenty years has turned towards sculpture, photography and installation. With the sculptural work Richard is often concerned with transforming ordinary objects into visually dense wall pieces that have the potential to evoke an array of experiential possibilities.

Richard’s Installation projects have included collaborations with Sante Fe based artist Lynne Hendrick, and his wife Anna O’Cain. With these installations Keely, Hendrick, and O’Cain explore ideas concerning the visceral side of accumulating, storing, preserving, and communicating ideas and information. Additionally Keely and O’Cain have collaborated on a large body of work on the topic of hurricane Katrina that includes photography, installations and film. Keely and O’Cain also collaborated with San Diego artist Kristine Diekman and dance artist Karen Schaffman on United and Severed an installation that was shown at the California Center for the Arts in Escondido and Art Produce in San Diego.

Richard’s work has a national reputation including solo exhibitions at gallery 4016 in Los Angeles and CAD/XO Gallery in Chicago and recent collaborations with Anna O’Cain for the Alt Picture Show, Museum of Contemporary Art San Diego, Ben Maltz Gallery (Otis School of Art, Los Angeles), Art Around Adams and the Spruce Street Forum in San Diego. Additional collaborations with O’Cain include a Ceremonial performance Kat and Lilly Lee at Beyond Baroque in Los Angeles and INSITE 2000 in San Diego.

Richard has also exhibited his work and given lectures at several well-known Universities and has been a “Visiting Artist” at Murray State University, Oberlin College and Montana State University. In 1996 he was awarded a grant from Art Matters in New York. Richard has traveled extensively throughout Europe, Asia, and Africa and has lived and studied Chinese painting in Taipei, Taiwan.

Currently Richard is living in San Diego CA and is an Associate Professor of Art at San Diego State University, where he teaches sculpture for the School of Art and Design.